The past is not history. It is all of what happened, not some of what some have said happened. For all of us, truth lies not in being faithful to a view of what mattered but in confronting the present as it re-presents the past, and in examining current injustices.

The University of Virginia was officially founded in 1819 when the Virginia General Assembly approved its charter. Reflective of the United States in the early 19th Century, slavery was an integral component of the University including its construction and continuing through a half century of operation. What until recently remained silent in official historical narratives about the University’s antebellum period from 1817 to 1865 was mention of the academical village’s dependency on an equal number of (roughly 100-150 at any one time) enslaved men, women and children. That history hid in plain sight for 155 years.

During the course of the Civil War, many students and faculty left to fight for the Confederacy. The student body declined from 600 students to 50 over the course of the war. The roles of enslaved laborers changed again, with some working as hospital workers and domestic servants, while others were leased to work for the Confederate Army. After the war ended, many freed blacks remained in the Charlottesville area and worked on construction at the University or as paid servants. It would be another century before African Americans would gain access to the University as students or faculty.

As it enters its third century, the University of Virginia remembers the enslaved people whose labor and talents made possible the construction and operation of the Academical Village. Forced labor, sacrifices and incalculable suffering—the daily experience of enslaved African Americans—shaped the institution’s first half century. 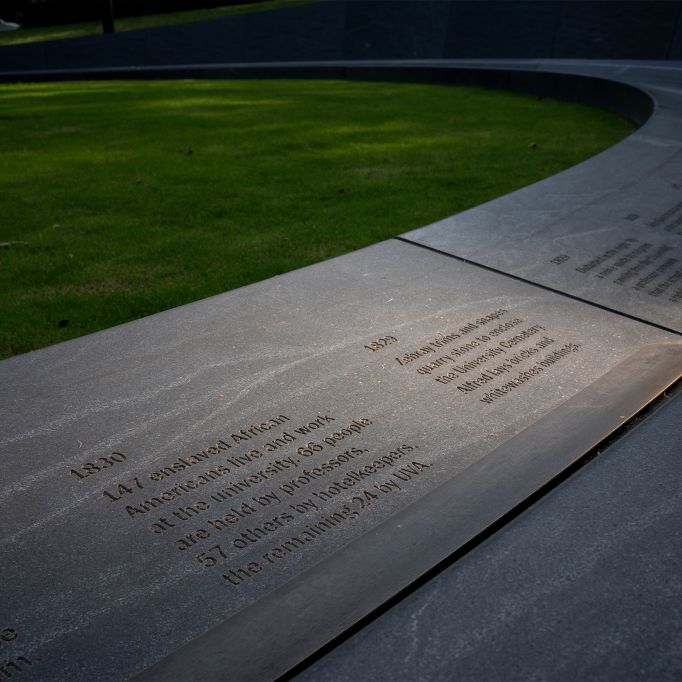 Known events that articulate the history of the enslaved laborers who helped to construct the University of Virginia.

The events that shaped the lives of this enslaved community — a history of enslavement at the university — are articulated on the Memorial through a timeline. The timeline begins with the arrival of enslaved to Virginia in 1619, and ends with the passing of Isabella Gibbons in 1890. This community timeline covers the arrival of 10 enslaved laborers to clear the land that would become UVA in 1817, and covers a history of transactions, work, and violence. The 70 entries are inscribed into a shallow, near-level water table. The water table is positioned just below the knee, which means that visitors lean in, almost in a bowing posture, to read the entries of the timeline.

The succinct and matter of fact tone of the timeline entries paints the difficult and unvarnished history of the life and violence of slavery with poignancy. Each word was painstakingly deliberated and debated by a committee of historians, including members of the design team, for nuance and meaning. This history is often thought of as a given, but in this case we witness the active writing of history from an archive of slavery that brings hidden truths out in the open as a rich and difficult public history to be shared and discussed in the public space of the Memorial. 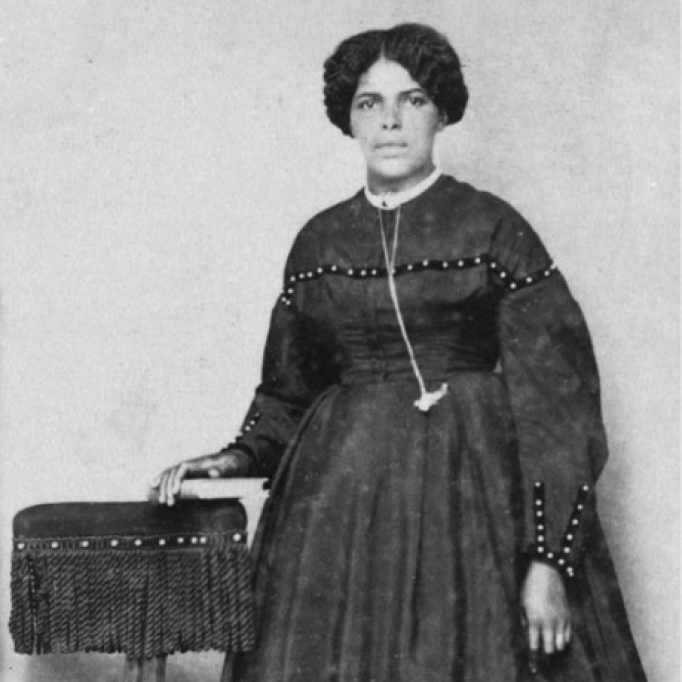 Isabella Gibbons and her husband William were among the several hundred enslaved individuals who struggled to lead lives that reclaimed what enslavement sought to deny them.

Given the anonymity of so many of the formerly enslaved, it seemed important to amplify the biography of one person to remind visitors that each of these people had a long and complicated life and history, even if we do not now have a record of it. The entries for Isabella Gibbons help to cohere the timeline around a more fully explored biography: “1853: Isabella Gibbons, a cook who works in a Pavilion kitchen, marries William Gibbons, a butler enslaved by another UVA professor. They teach themselves to read and write.” We know more about her because she remained in Charlottesville as a prominent educator after the war: “1866: Isabella Gibbons, formerly enslaved at UVA, teaches at a freedmen’s school in Charlottesville with 42 students. One month later the school has grown to 63 students. It will become the Jefferson School.”

Gibbons is also notable because we have a rare surviving photograph of her, taken while she was a teacher. Of the thousands of people enslaved at UVA, photographs survive for only a handful. Her vigilance is poignantly reflected in a quote from an 1867 letter from Gibbons that ends the timeline:

“Can we forget the crack of the whip, the cowhide, whipping-post, the auction-block, the spaniels, the iron collar, the negro-trader tearing the young child from its mother’s breast as a whelp from the lioness? Have we forgotten that by those horrible cruelties, hundreds of our race have been killed? No, we have not, nor ever will.”

​Gibbons’ commitment to remembering was not widely held among the white leadership of the University. Not long after the Confederate surrender, white elites began the work of constructing a history that ameliorated Southern pride at the expense of both historical accuracy and Black dignity.

Artist Eto Otitigbe opted to artfully inscribe a relief of her eyes on the outside surface of the Memorial—a woman once enslaved, then freed; once forcibly diminished, now rendered monumental. Those approaching from the north might, in the right lighting conditions, note her eyes watching them in return.

Daina Ramey Berry, The Price for Their Pound of FLESH: The Value of the Enslaved, from Womb to Grave, in the Building of a Nation. United States: Random House Inc, 2018.

Douglas A. Blackmon, Slavery by Another Name: The Re-Enslavement of Black Americans from the Civil War to World War II. London: Icon, 2012.

Angel David Nieves and Leslie M. Alexander, ed. We Shall Independent be: African American place making and the struggle to claim space in the United States. Boulder, CO: University Press of Colorado, 2008.

“Connecting with Community and Descendants.” Panel Discussion on October 19, 2020 as part of the symposium "Universities, Slavery, Public Memory, & the Built Landscape," hosted by the University of Virginia President's Commission on Slavery and the University and the Slave Dwelling Project.

“Memorial to Enslaved Laborers Update.” Panel discussion on September 29, 2018 at the University of Virginia.

Narratives of Slavery at Jefferson’s University.

President’s Commission on Slavery and the University: Report to President Teresa A. Sullivan. 2018.

“Unearthed & Understood: Slavery and the University of Virginia.” Documentary film by Eduardo Montes-Bradley, 2014.

This essay on the History that contextualizes the Memorial draws on existing materials and articles written by Louis P. Nelson, Mabel O. Wilson, and Charlette Caldwell; brochures about the life of enslave laborers at UVA created as part of the President’s Commission on Slavery and the University; and a transcription of an October 2020 presentation given by the design team including Meejin Yoon (Howeler + Yoon Architecture), Mabel O. Wilson (Studio &), Frank Dukes (Institute For Environmental Negotiation, University of Virginia), Gregg Bleam (Gregg Bleam Landscape Architect), Eto Otitigbe (Department of Art, Brooklyn College), and Diane Brown Townes (Community Ambassador).